Chicago is an incredible city with a seriously impressive food scene, tons of breweries, a historic baseball stadium, comedy clubs graced by many entertainment icons, and many wonderful museums. The streets are bustling and in a lot of ways, this Midwest city reminds me of a smaller NYC. With a Great Lake running along the city’s east side, a meandering river, and a wide variety of architectural styles, Chicago is a truly unique and awesome city. Read on for the top 10 best things to do in Chicago! 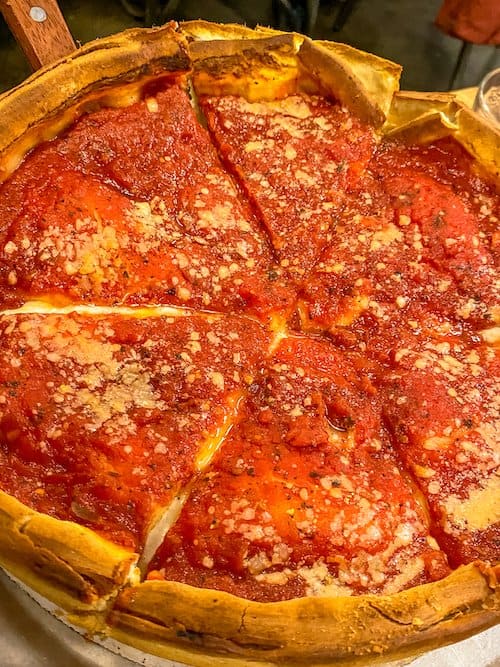 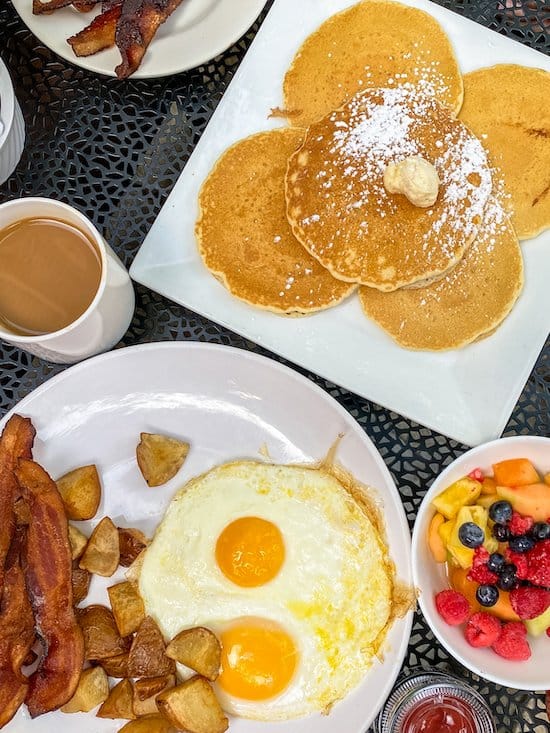 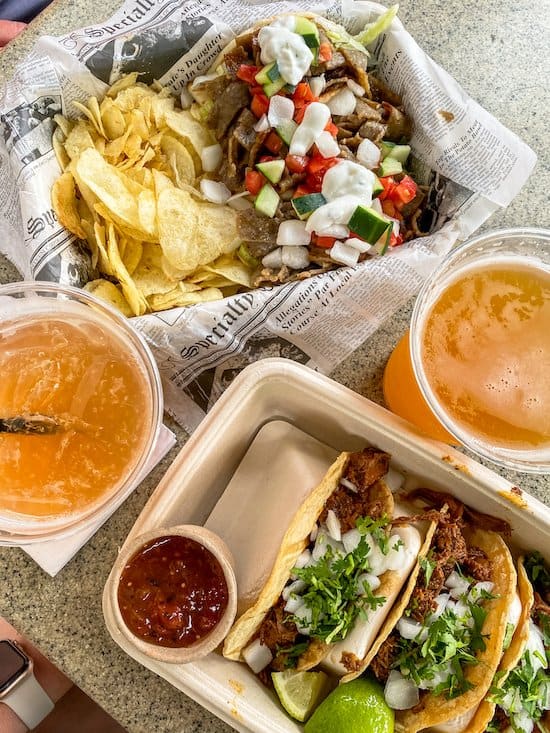 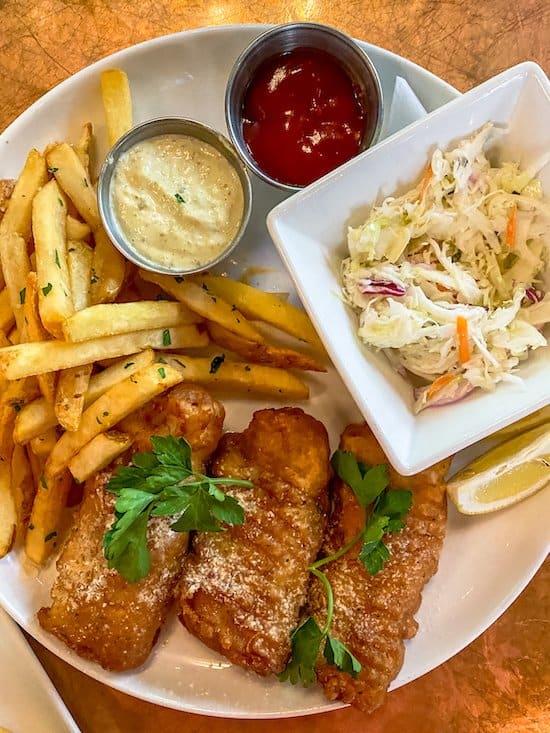 Chicago has a fantastic food scene with hundreds of restaurants and several top-notch chefs, including James Beard Award winners. You can find anything from cheap and delicious hot dogs to high-end oyster bars. While in Chicago, you’ll want to be sure to experience a Chicago-style hot dog, deep-dish pizza, and BBQ ribs. While you can certainly find restaurants that interest you on Google or Yelp, it can be overwhelming. Consider signing up for a guided food tour. You’ll find a variety of transportation options for the tours including walking, biking, and buses. 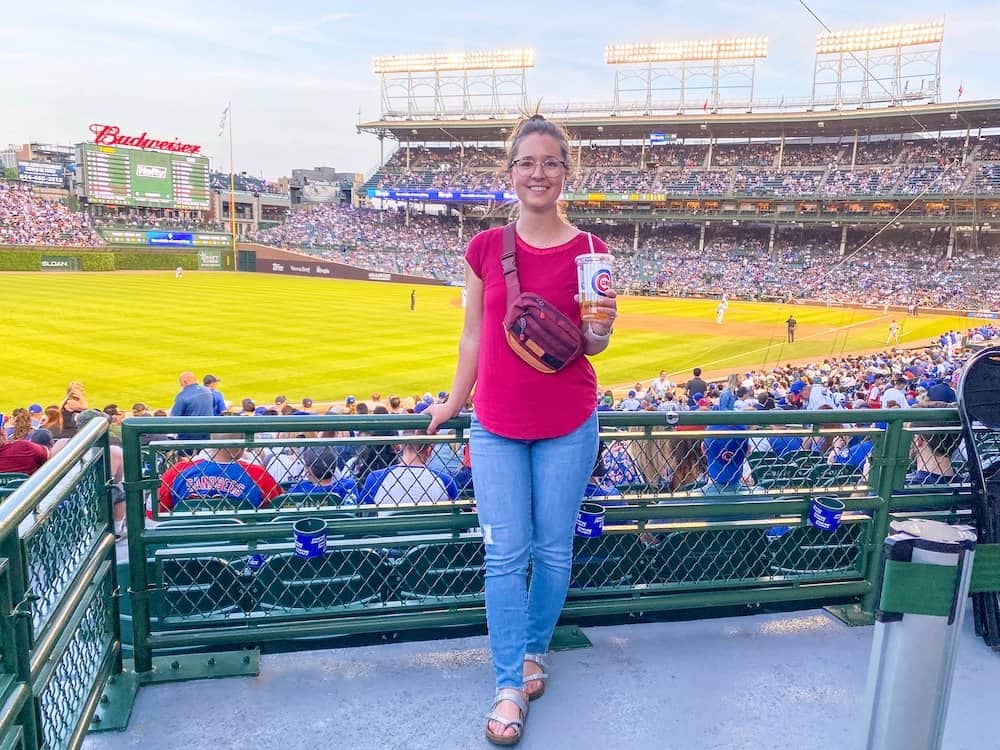 2. Catch a Cubs Game at Wrigley’s

Wrigley’s Field is an old and historic baseball stadium beloved by locals. So much of this stadium has been preserved, allowing it to keep its original charm. Going to a baseball game is fun for a date or a girls’ trip. Once inside the stadium, you’ll find local beer on tap, hot dogs, ice cream, and much more! It’s a great place to relax on a summer evening. 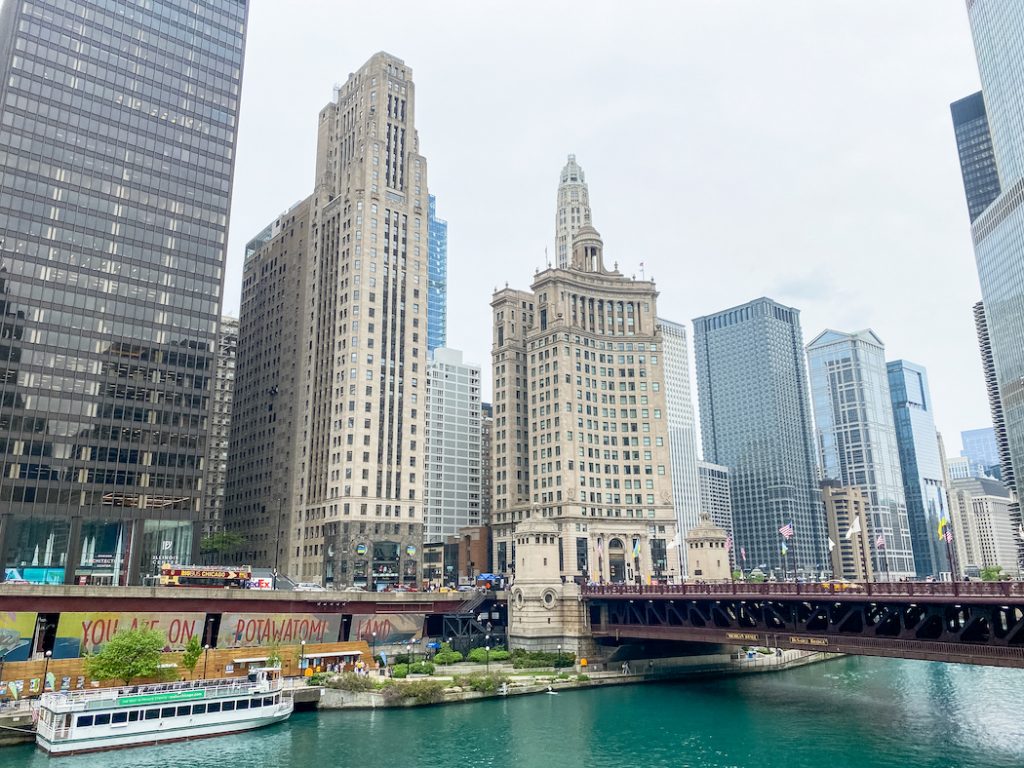 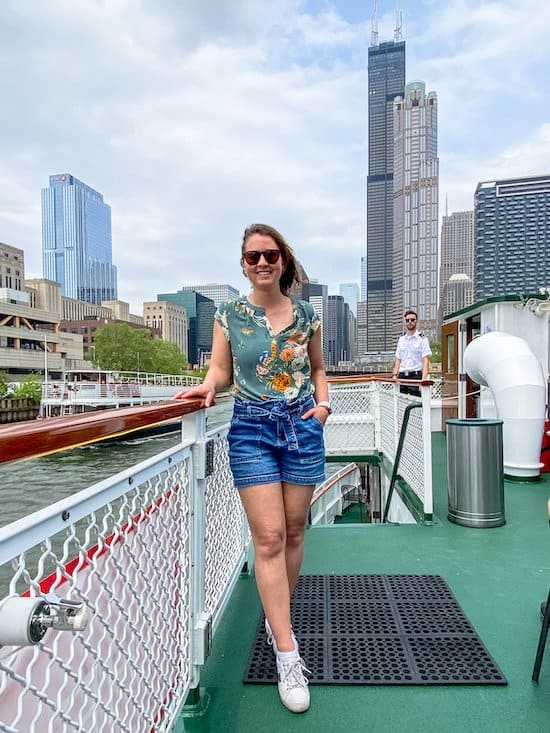 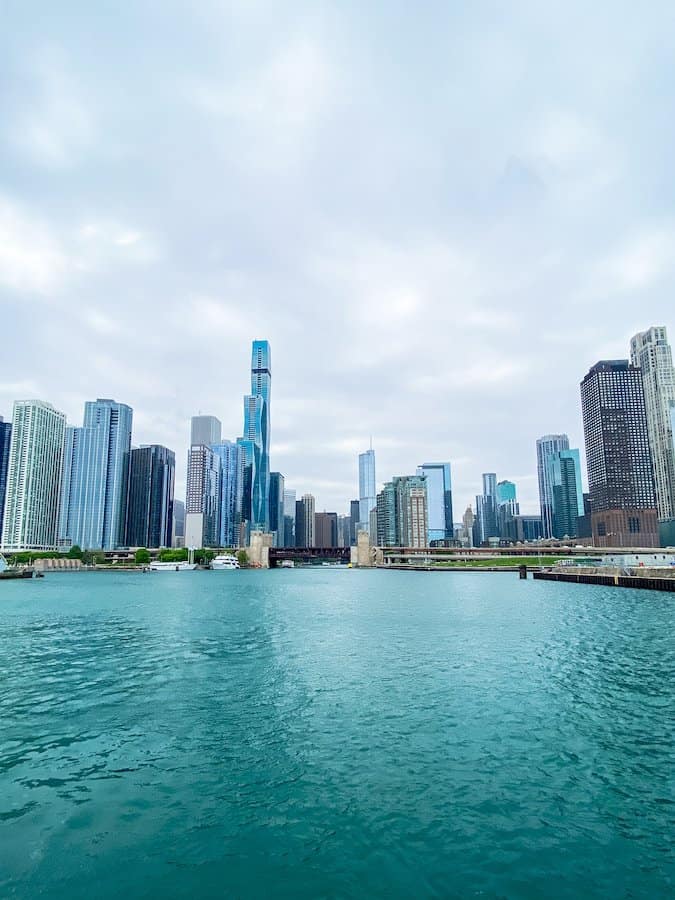 One of the coolest things to do in Chicago is taking an architecture river cruise tour. This 90-minute boat ride will take you up and down the Chicago River as a tour guide explains the expansive variety of buildings you’ll see, including original brick buildings, Art Deco, postmodern, Greco-Roman, and much more. You’ll learn not only why buildings were built a certain way for practical reasons or codes, but what artistic vision the builder had, like making a subtle tribute to Frank Lloyd Wright, using green glass windows to match the color of the river or another inspired by the Giralda in Sevilla, Spain. I learned so much and found this tour to be really educational and interesting. 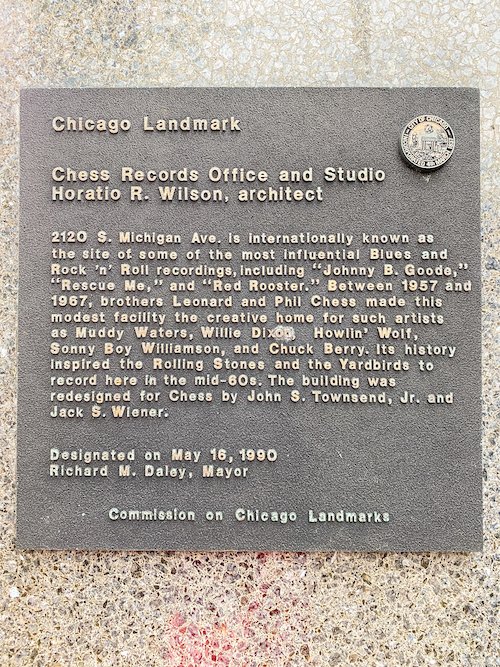 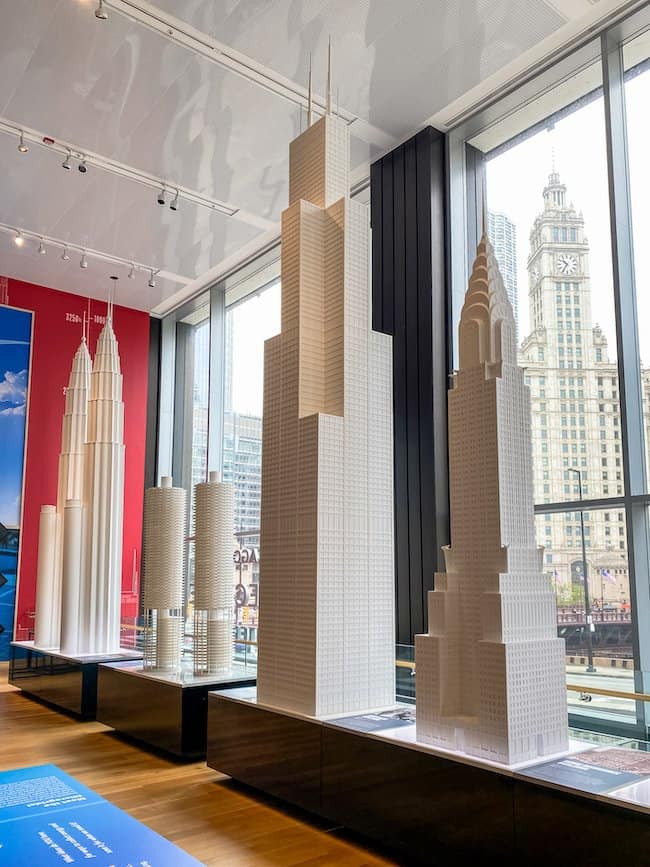 I love spending time at museums and Chicago has a lot of them! Check out the Chicago Architecture Center to learn about the city’s buildings and see an awesome city model to get a closer look at over 4,000 buildings! Another great museum is the Blues Heaven Foundation. You’ll learn about some of the greatest Blues musicians like Willie Dixon, Buddy Guy, Muddy Waters, and Ma Rainey. You’ll get to see the studio where many famous songs were recorded, the actual instruments they used, and more. The Art Institute is another great place to see photography and sculptures, as well as paintings by Cezanne, and Van Gogh. 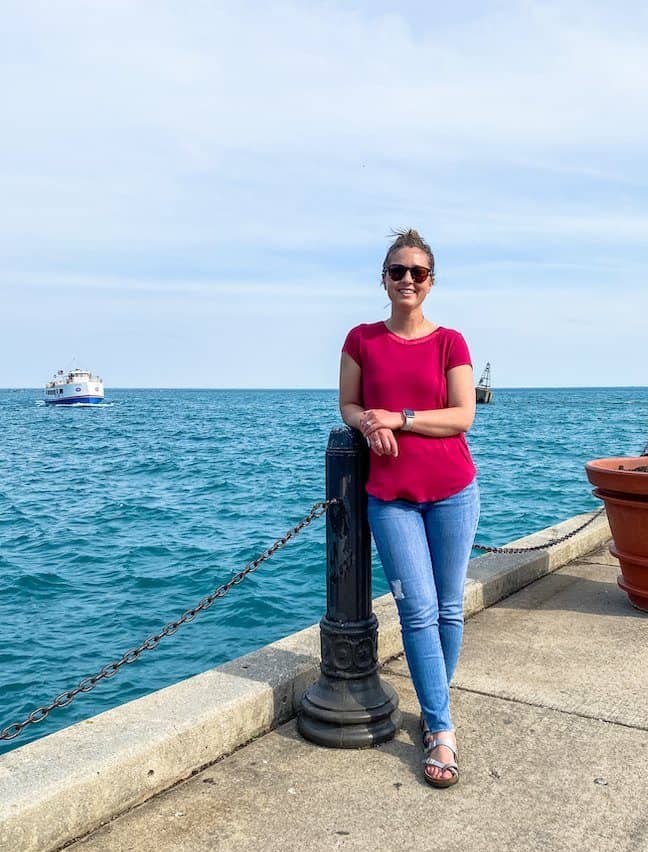 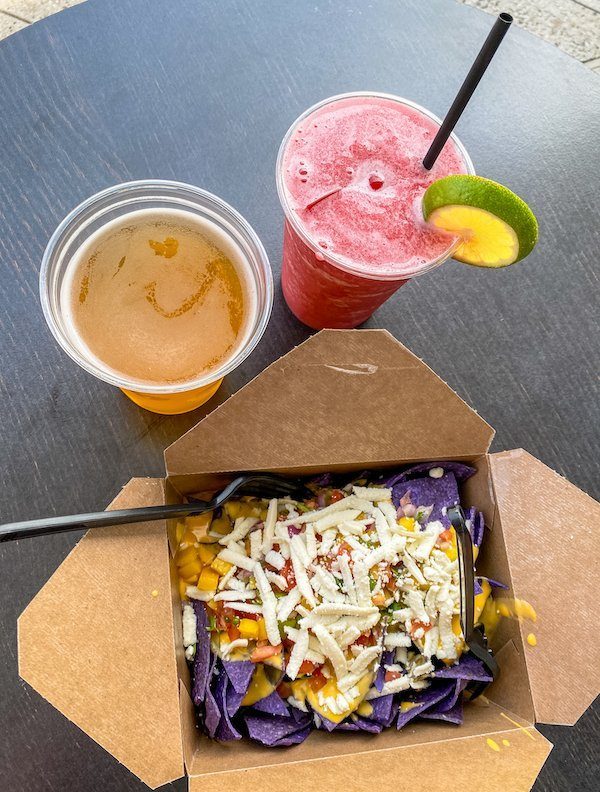 Navy Pier is a great place to take a stroll and enjoy expansive views of Lake Michigan. You can walk along the pier and enjoy the sun, or enjoy a ride on the Ferris wheel and merry-go-round. There are also a handful of places to grab nachos, beer, smoothies, and ice cream. 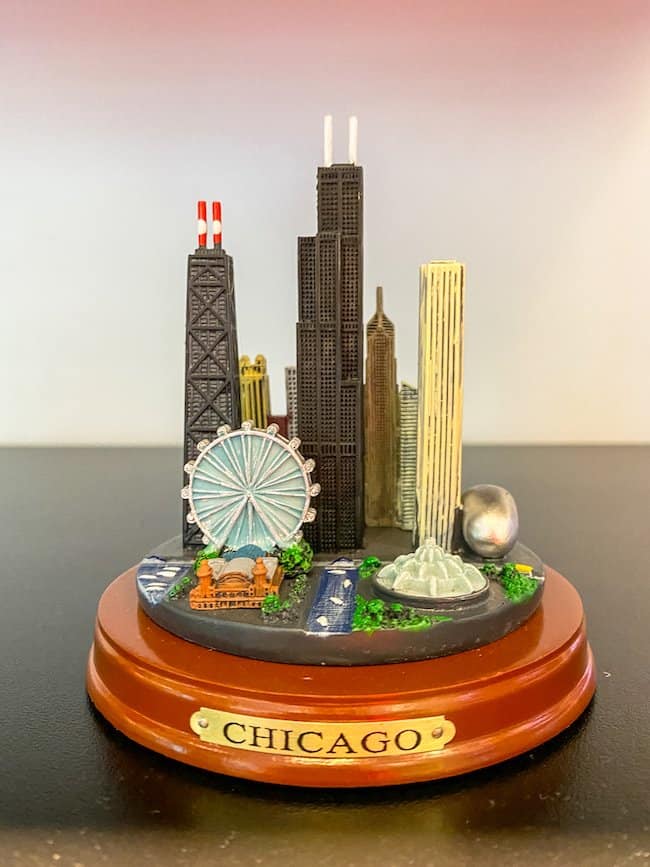 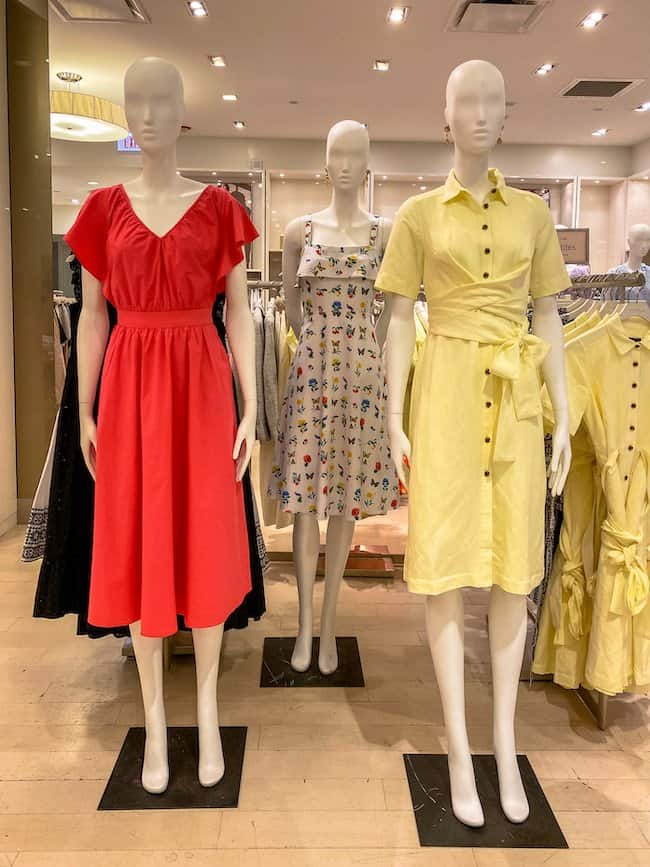 6. Shop Along the Magnificent Mile

The Magnificent Mile is a long strip of Michigan Avenue lined with high-end shops like Ann Taylor, Tiffany and Co, Dior, Nike, and Channel. This part of town is bustling with people ready to shop and purchase something special. You won’t find many restaurants or coffee shops in this part of town, however, we did find a massive Starbucks with four floors! 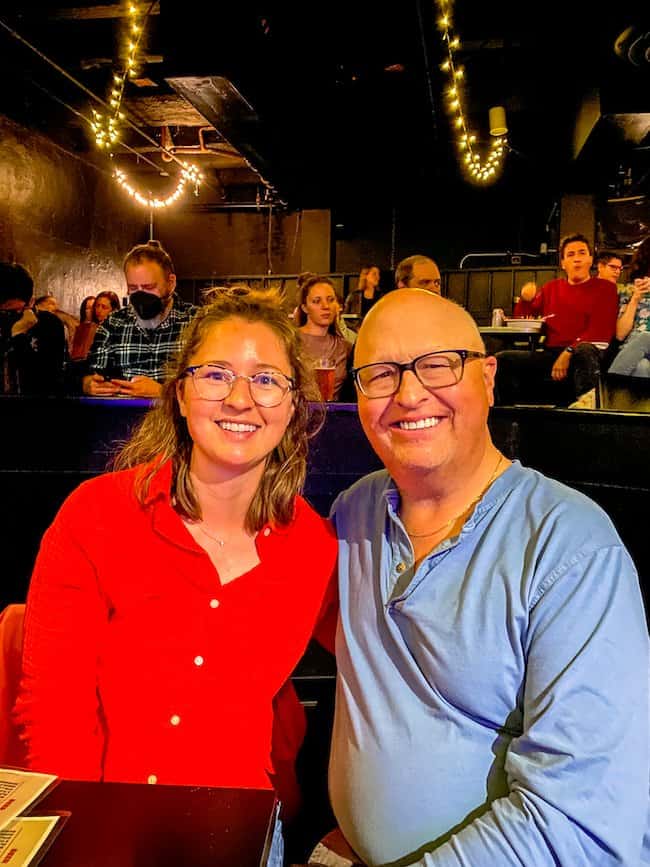 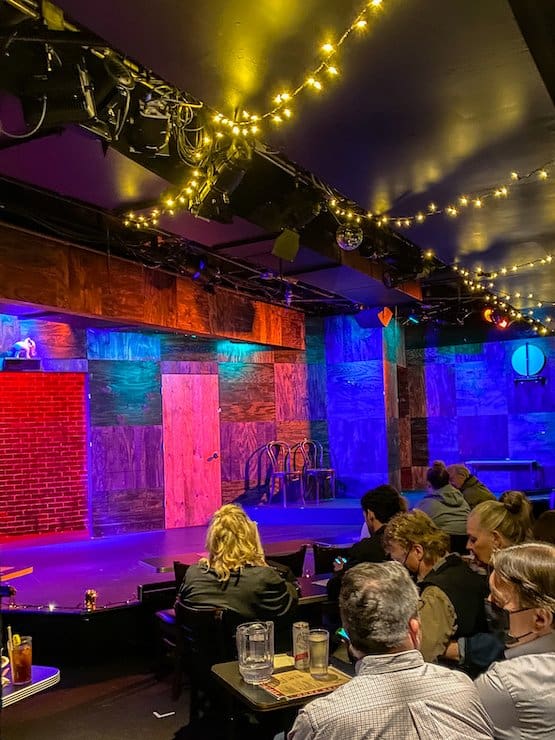 Chicago has a great theatre scene and you’ll be able to find many places to see a show or play. One of my favorite places is The Second City comedy club. This live performance improv theatre has seen comedy icons build their careers here including Aidy Bryant, John Belushi, Steve Carrell, Steven Colbert, Catherine O’Hara, Eugene Levy, Jordan Peele, Tina Fey, and Amy Poehler. I’ve seen a few shows here over the years and they always have me doubled over laughing. If you sit near the front, however, be prepared to be called on by the cast when they need suggestions for an improv scene! 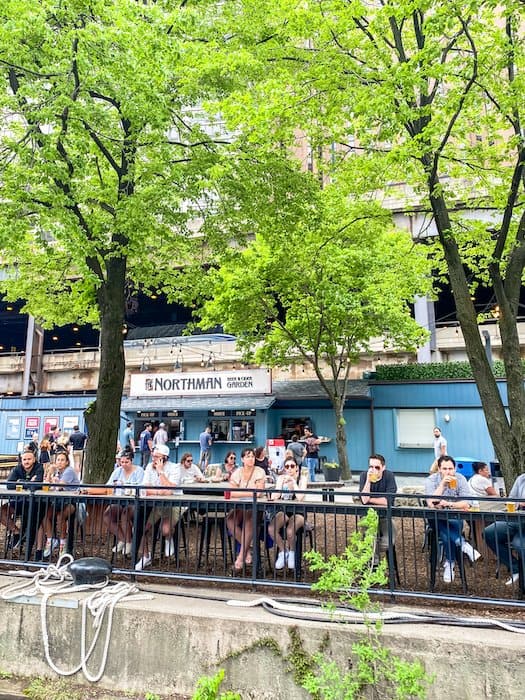 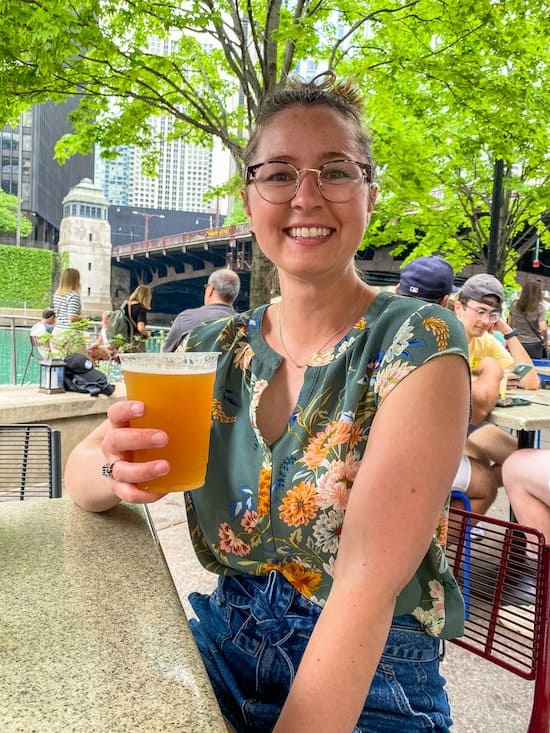 8. Eat along the Riverwalk

The Riverwalk is 1.25 miles of pedestrian paths running along the Chicago River. You’ll find many trees, parks, restaurants, and spots to grab beer, cocktails, and coffee. Inspired by the San Antonio riverwalk, it’s a great place to grab lunch, a drink, or just take a beautiful walk. 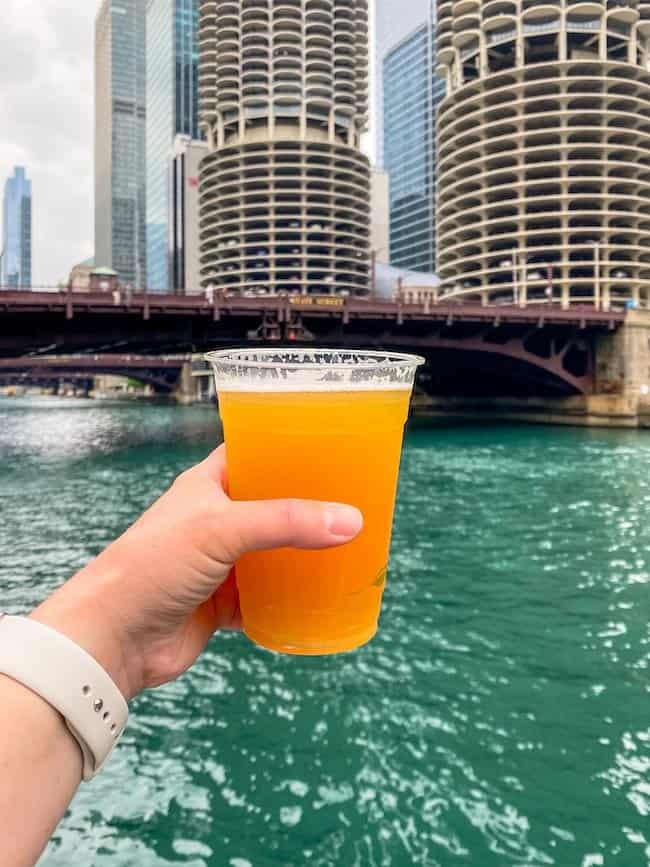 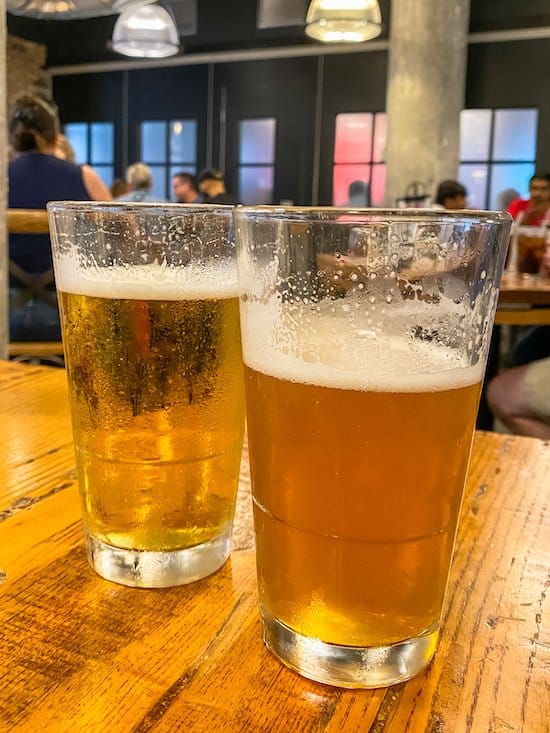 Chicago has dozens of fantastic breweries including Goose Island, Dovetail, and Half Acre Beer Company. I love spending time at breweries because of their relaxed atmosphere. The breweries are scattered around the city, so if you want to try several at once, visit the Chicago Brewhouse to sample a variety of beers. The Brewhouse is on the Riverwalk, so grab a seat outside and enjoy the beautiful view! 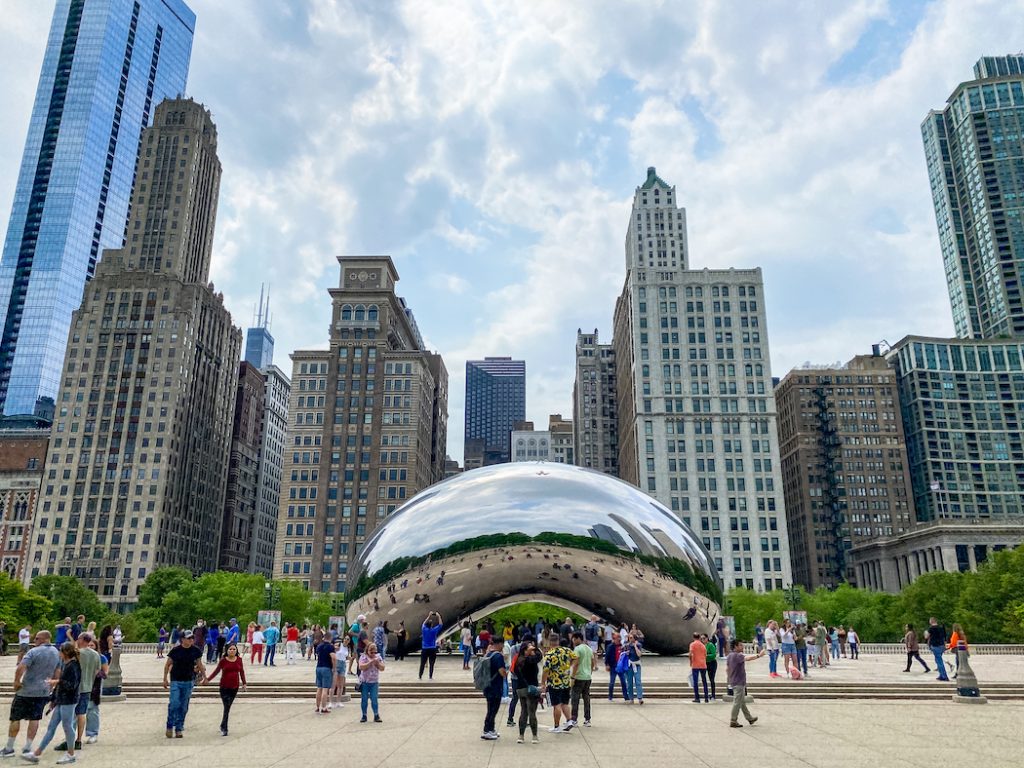 In the heart of Chicago is a large and beautiful space to break up the bustling sidewalks and honking cars. Millennium Park has the iconic “Bean” or Cloud Gate sculpture, along with flowers and trees. You’ll also find a large stage for performances with a sprawling grass lawn for concerts and shows. 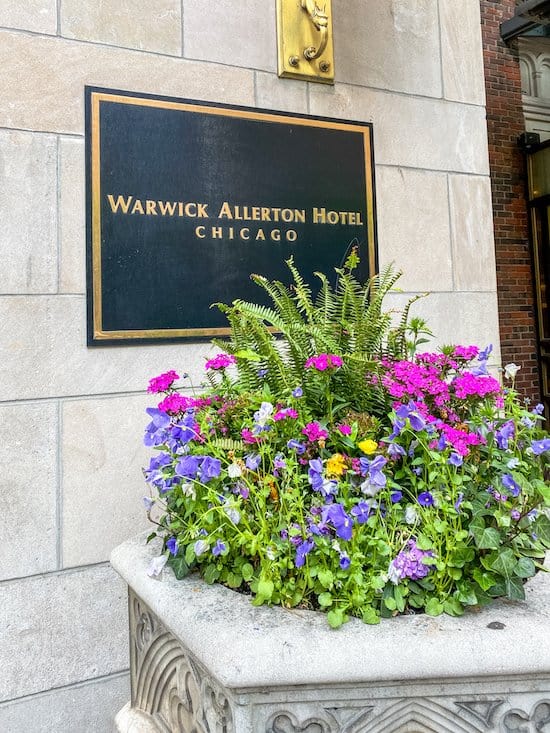 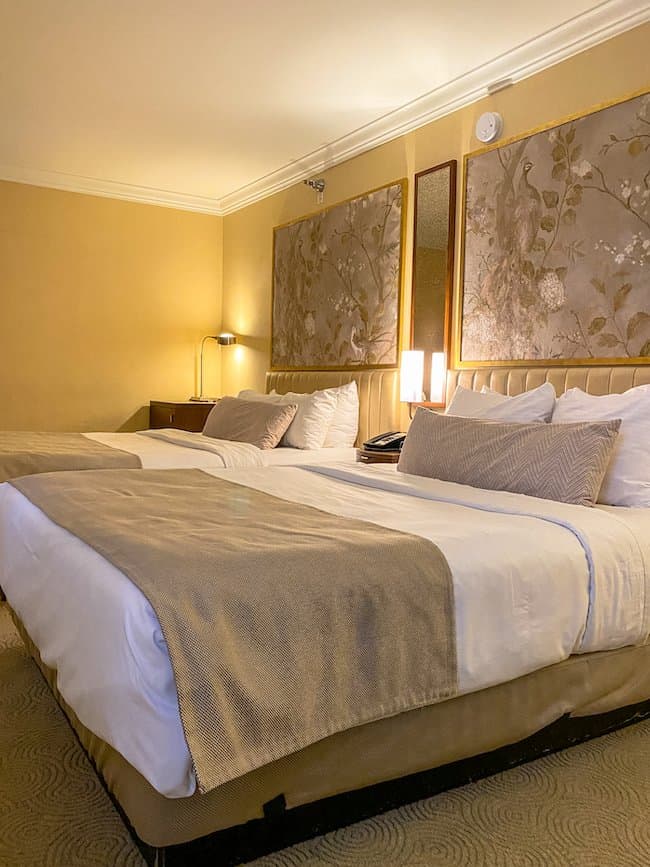 There are a lot of hotels and Airbnbs in Chicago and it may be hard to narrow down the list. During our trip, we stayed at the Warwick Allerton Hotel, right in the heart of the city. We loved that this hotel was in the center of Chicago’s main attractions, allowing us to walk to almost everything (or a short walk to the L Train). While the hotel didn’t have any special amenities, it was clean with a large bathroom and a large lobby. The main disappointment for us was that our windows faced a brick building just a few feet away, so we had no view and no real sunlight coming into the room. However, for the price and the location, it was a great spot and I would stay here again.

Plan Your Trip to Chicago

Chicago is a fantastic city with seemingly endless places to eat, drink, and explore. The buildings are so unique and Lake Michigan is expansive and breathtaking. I can’t wait to go back and explore even more! Looking for more midwest inspiration? Check out my blog posts on Minneapolis, Madison, and Duluth! 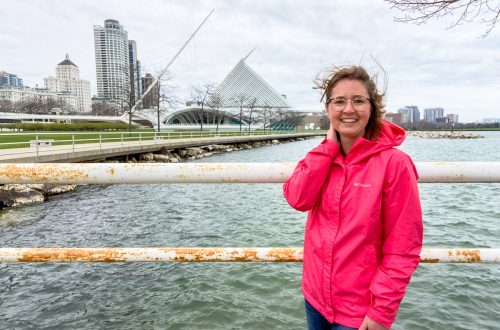 10 Best Things to Do in Milwaukee, Wisconsin 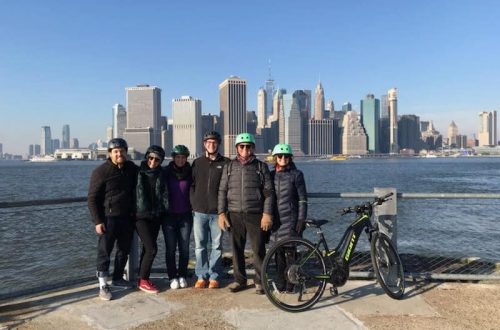 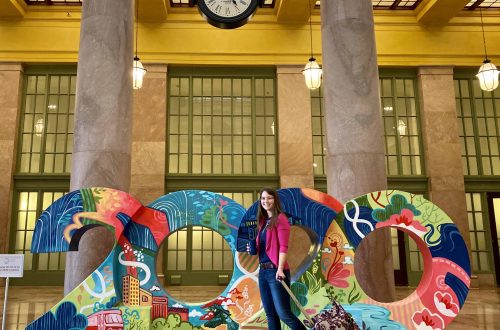 My Experience Flying During the Covid-19 Pandemic

Inspiration for Your Day Trip to Northfield 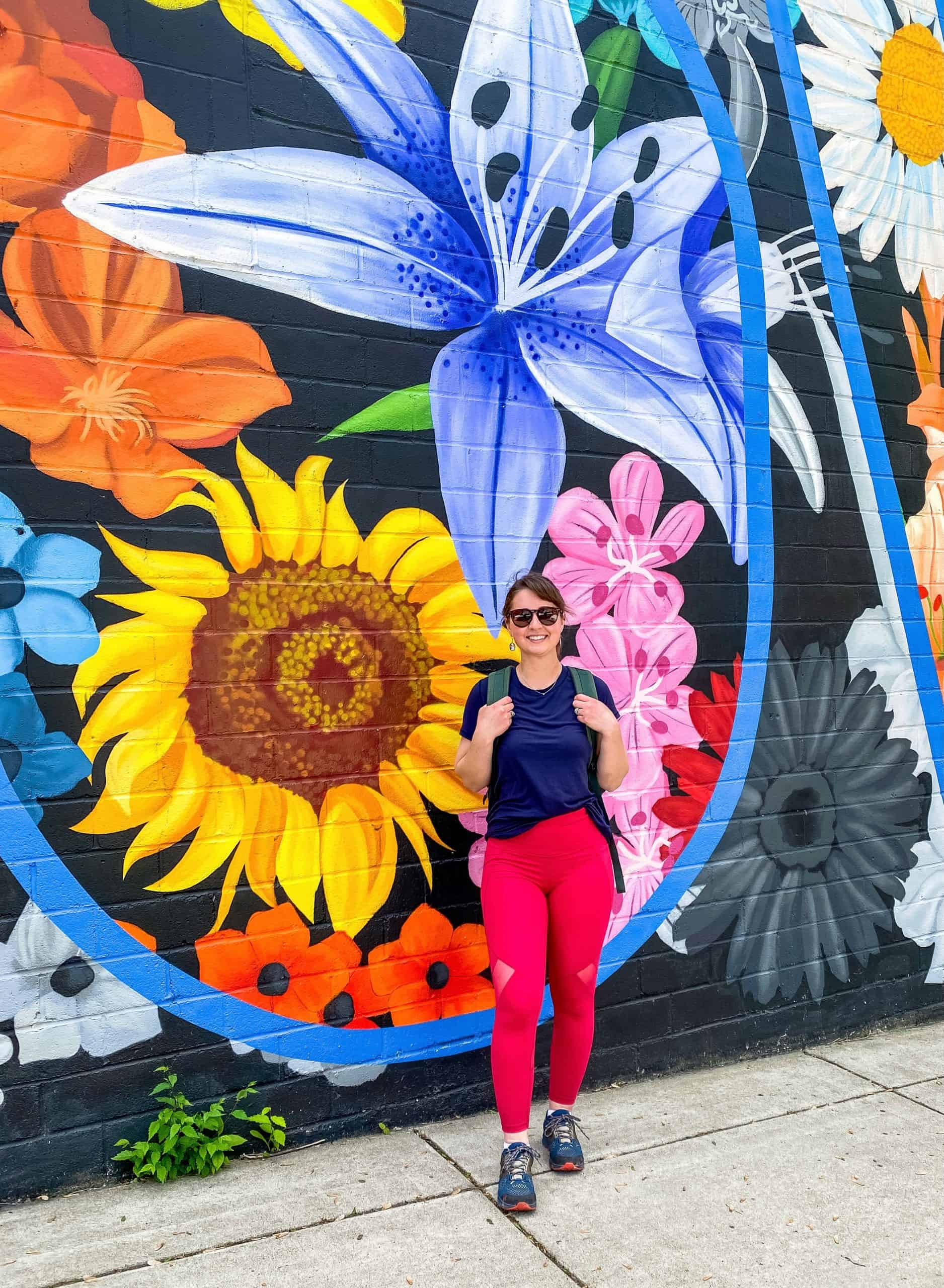 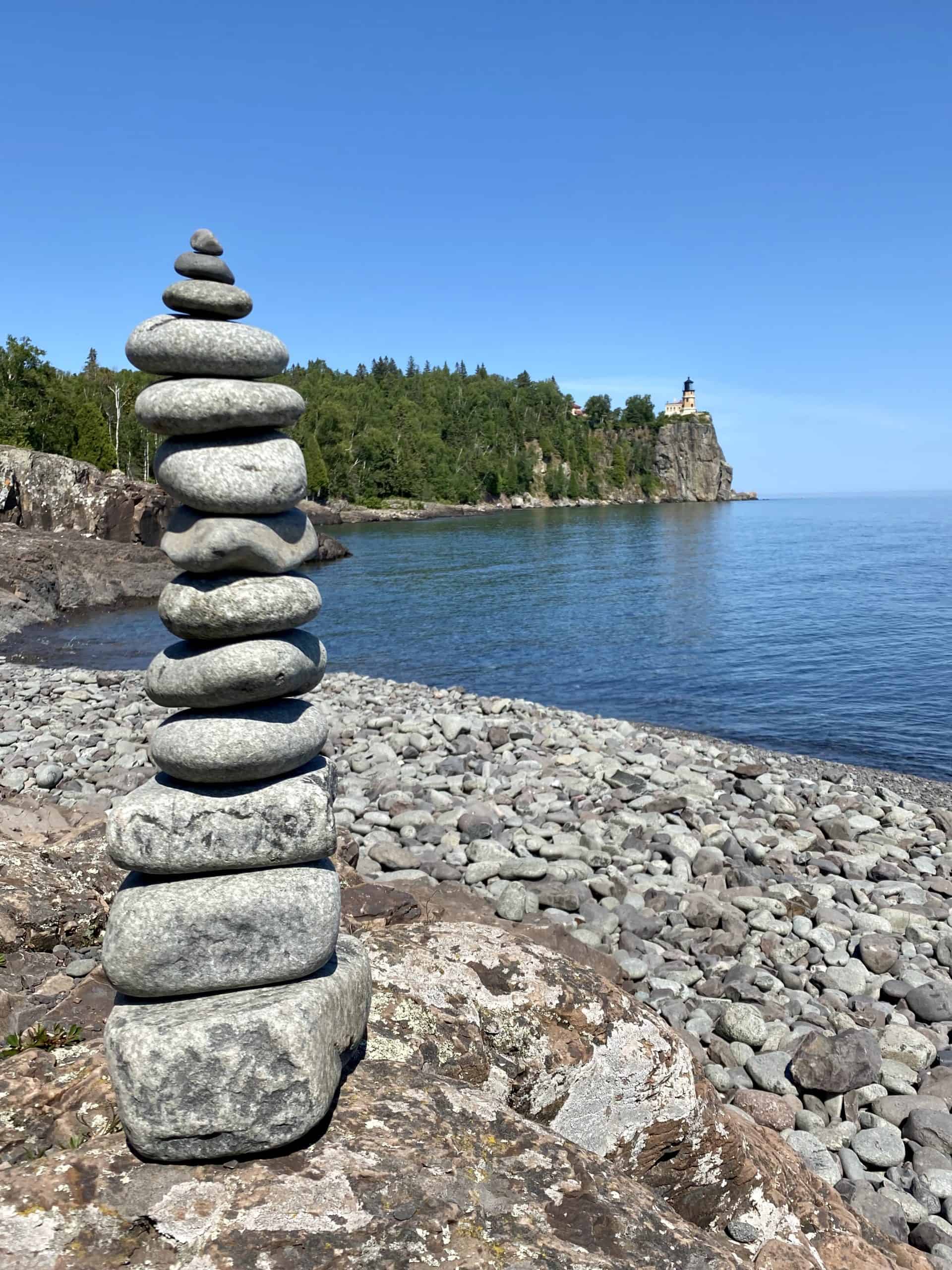 80+ Dog-Friendly Things to Do in Minnesota 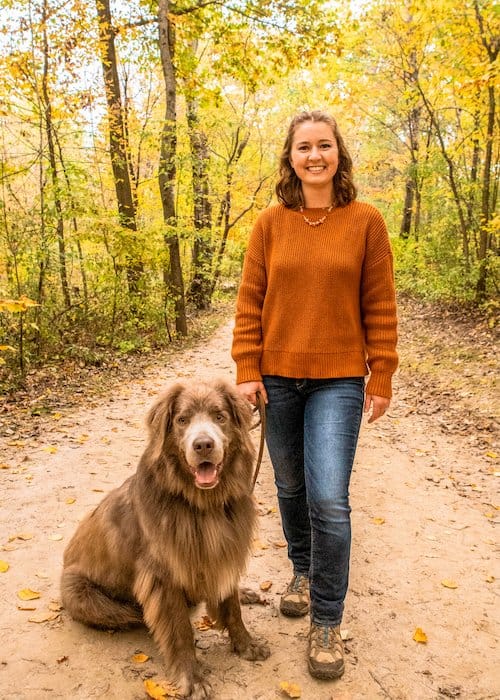 15 Unique Things to Do in Faribault 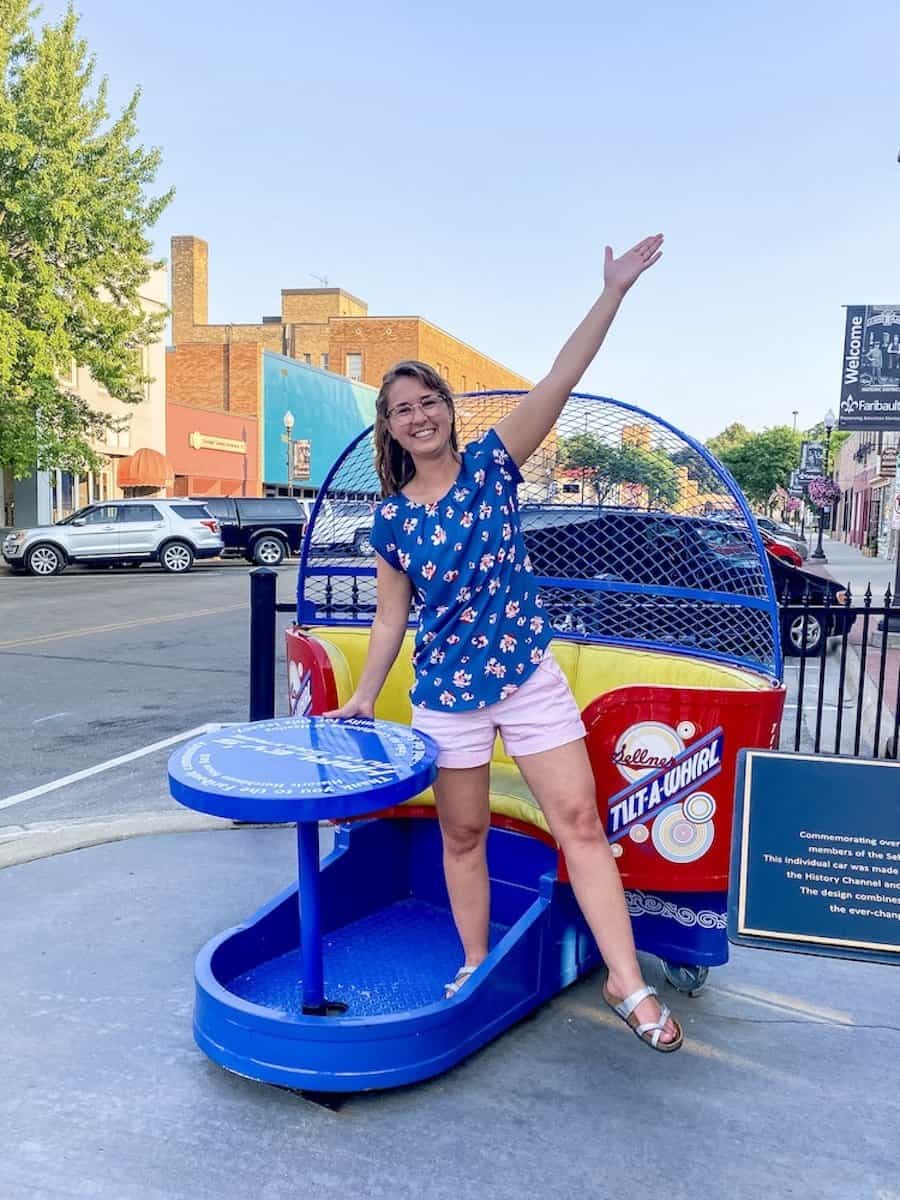